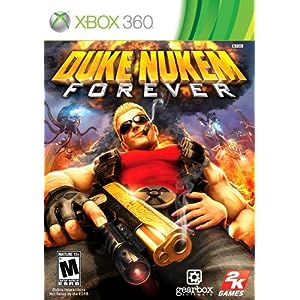 Of course, that was sometime around 1997, and I heard it was coming in 1998 if my memory serves me. I heard something similar for 1999 and 2000 or 2001 as well. After a few more years it became a running joke. 3D Realms kept saying it would be done “when it was done”, and “when it was done” seemed to be “never”. After more than ten years of “coming soon”, the game was completely cancelled a few years ago. Take-Two sued 3D Realms for wasting so much time and money and the game had completed it’s life by becoming a laughing stock.

Of course, behind the scenes there were still dealings going on. It turns out gearbox was in negotiations to release Duke Nukem Forever (one of the founders of gearbox worked on a version of Duke Nukem 3D). Finally at PAX last year they announced that the game would finally be released after 14 years. 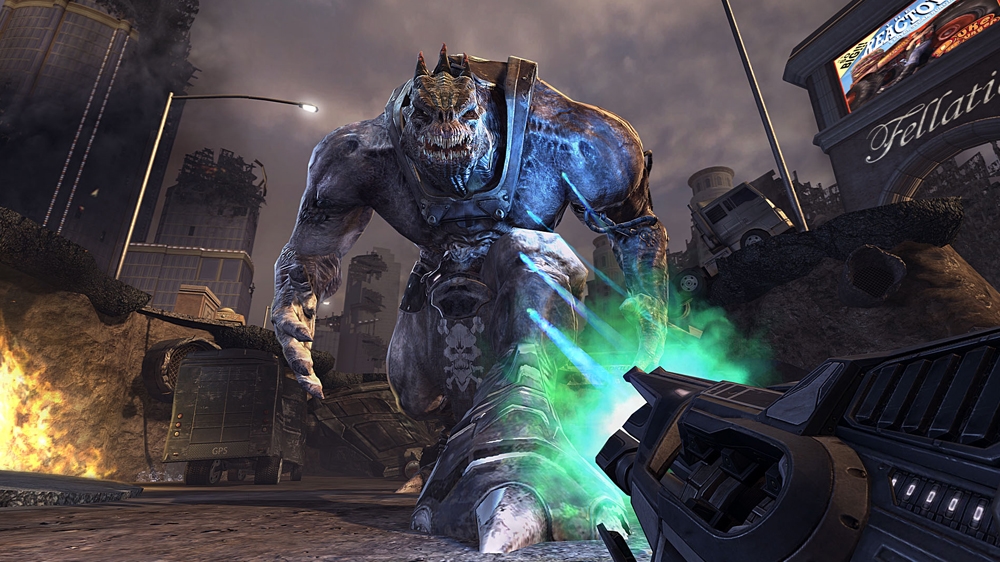 I have to say that I was pretty excited. I imagine that nostalgia was kicking in or something, but it made sense at the time. I absolutely loved Duke Nukem 3D and the last gearbox game I had played was Borderlands which was amazing as well (I should write a review about that one sometime, if you haven’t played that game yet, go buy it now, it’s only $15). Between the next version of a classic game I loved being finished by a developer who developed a recent game I loved it was a perfect recipe for awesomeness. Unfortunately, even perfect recipes can be burned.

After yet another delay (minor in comparison to the others) Duke Nukem Forever was finally released on June 14th 2011 and since I had pre-ordered it I received it that day. I was excited to play it when I got home from work that day and jumped right in to do so. I played through a bit before going to bed that night. The next day when asked by a coworker what I thought of it, I summed up my thoughts by saying that “it is a terrible game, but I am glad I bought it”. By the end of the week I realized what a stupid statement that was.

First, the game starts off as a game inside the game and you’re literally pissing (or can be). I suppose that’s sort of funny, or at least it was when I was 11. Worse, the stall next there has a piece of shit you can play with for an achievement, and I’m not even making that up. I’ve been in the game for 90 seconds and I’m already covered in urine and feces? He was saying some classic “funny” lines though, so I forgave that part and continued on. The graphics looked like they were out of the 90s (oh wait, I guess they were), and while I never expected it to live up to some of the modern day games graphic wise, the poor quality of the graphics was jarring. There were mirrors all over and when I jumped, my character in the mirror simply didn’t move. In 14 years, couldn’t the artists figure out how to assign more than 6 bones to the character? 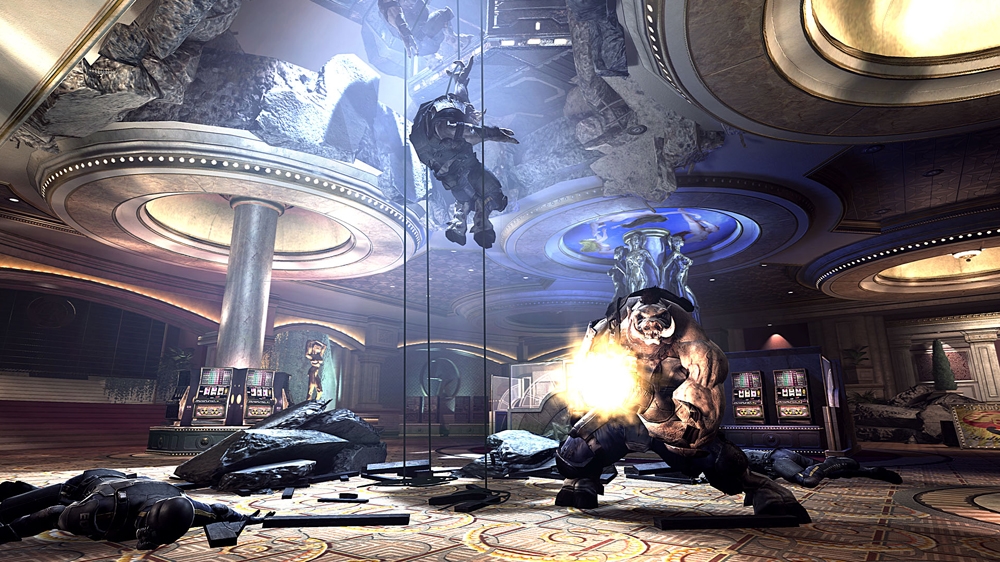 I honestly expected most of the graphic inferiority to be a “by-product” of the game within a game motif that you start under. Yet, when that game was over and I was in the “real” world, the graphics were exactly the same, and I was quite dissapointed in that. Of course, who cares about graphics if the game play is top notch right?

Except, game play was horrible as well. It’s like they forgot what made Duke Nukem 3D fun. It certainly wasn’t his witty lines, they added flavour, a nice bonus, but didn’t make the game fun. It definitely wasn’t digitized boobs, and even if it was due to the grahpical inferiority displayed quite a few games out now show you better anyway. They took away the ability to hold every gun in the world down to having just two (which I didn’t like in Halo and still don’t like now). No longer do you have health, but now you have “Ego” which is simply a glorified health/shield combo (again, like Halo and every other shooter in the world nowadays it seems).

Yet, even after taking some of these “design decisions” for more recent games, they completely skipped some of the other ones like helping to improve aiming (via magnetizing or auto-aim or something) which made it into a complete chore to shoot things. Plus, I could barely tell if I was actually hitting the thing I was shooting at to begin with. Oh, and can we make a new rule? Water levels are terrible and they should be outlawed.

Duke also has a reputation for being cocky. I like that actually, I don’t mind arrogance at all, but you need to be able to back it up. Duke had the cockiness down without the amazingly good game to back it up though. Throughout the game he makes fun of Halo (when he see’s master chiefs helmet), Gears of War (Gears 0, Duke 1), Valve games (Half life or portal? who knows, he says “I hate valve puzzles”), all of which are vastly superior to Duke Nukem Forever. 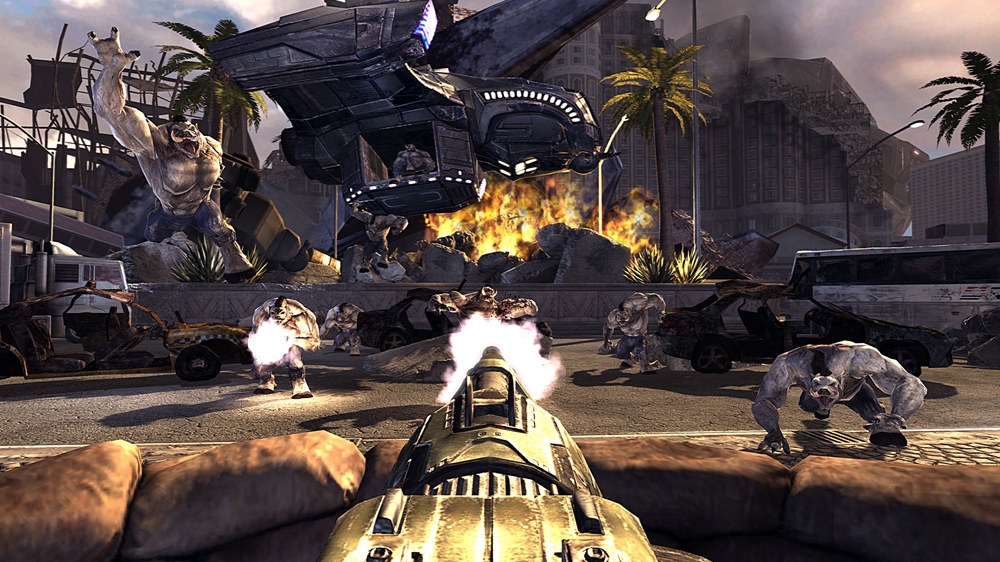 I normally don’t play a ton of multiplayer with these types of games (for a variety of reasons), but since I remembered all of the fun I had playing multiplayer back in Duke Nukem 3D, I gave it a shot here, and it wasn’t terrible, but it certainly had lost alot of the fun. The graphic problems were even more noticeable (it’s one thing when the image of yourself in a mirror is not moving while jumping, completely different when it’s your opponent). It’s still fun to shrink someone and stomp on them though.

After all that, I haven’t even talked about my biggest problem with the game, and that was loading times. I don’t know who worked on the system for loading in this game, but he/she/they should seriously consider a different line of work. I can’t fathom how anyone could look at the loading times this game had and think “yup, that’ll work”. You had 14 years to make this damn thing, loading should not take 45 seconds anytime something minor happens. I’m fighting a boss and I died? The last save point was exactly where the boss was? All you have to do is reset the bosses health and my health and ammo and we’re good to go? Nope, 45 seconds of loading time.

Now, I know that I’m a bit of a stickler for performance and loading times. I mean, I’m giving a talk about this exact issue at Gamefest next month, and I’ve given several performance talks at GDC over the years, so perhaps I’m just naturally inclined to notice them? I’ve had several other people who have complained about them with me as well, so it isn’t just me. These are extremely noticeable and very frustrating. Hell, part of me wonders if it wasn’t done on purpose, because I think I would have to work hard to get things to load so slowly (without putting artificial waits around everything). I simply cannot fathom what was going on during those loading screens other than maybe Duke was praying we would just stop playing.

At the end of the day, I bought this game on nostalgia and little else. For Duke Nukem Forever, nostalgia and 14 years simply wasn’t enough. The game needed a lot more work to be worthy of the gearbox logo if you ask me. It was one of my most disappointing purchases ever.